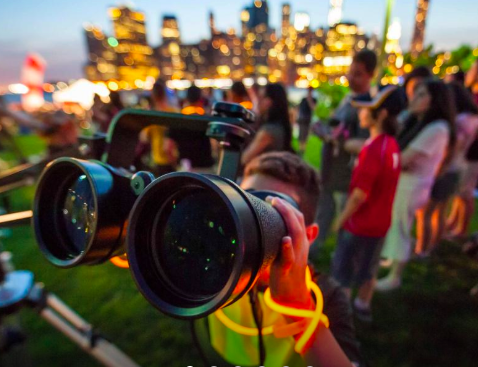 The 12th annual World Science Festival kicks off on May 28th for a week packed with over 60 events that take science out of the lab and into the streets, parks, museums, and premier performing arts venues of New York City.

World Science Festival brings stargazing back to BBP this year along with UP – Umbrella Project, an amazing participatory performance piece by Pilobolus!

This night has it all: multiple telescopes for planets and stargazing; an LED-lit balloon chain installation, floating overhead and swaying to the changing winds; and world renowned scientists and chefs, including a former White House pastry chef, discussing the vagaries of cooking, eating, and staying alive in outer space. Grab your picnic blanket and head to Brooklyn Bridge Park to contemplate–and savor–your singular, magical, miniscule spot in the universe.

Attendees can take a look through WSF’s high-tech telescopes for an up-close view of the moon, Jupiter, and other celestial objects. Back on Earth, join Bill Nye the Science Guy for a Q&A and book signing, and meet astronauts Yvonne Cagle and Leland Melvin! Then, grab an LED-lighted umbrella and jump into the one-of-a-kind Umbrella Project.