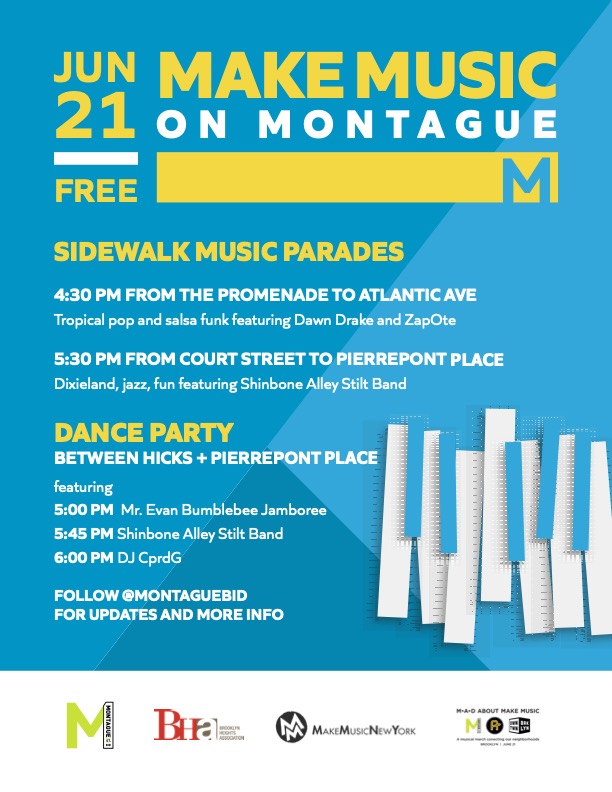 On Monday, June 21, Montague Street will be filled with the sounds of music as part of Make Music NYC.

The fun starts at 12pm with the sounds of guitars, acapella, jazz, and more on the sidewalks of Montague Street in front of local businesses from Court Street to the Promenade throughout the day.

4:30 pm MAD about Make Music: Dawn Drake & Zapote
In celebration of Make Music New York, the Montague Street BID, Atlantic Ave BID, and Downtown Brooklyn Partnership join forces for a MAD(!) musical march with a percussion band from neighborhood to neighborhood to unite communities and fill the streets with music. American bassist, conguera, and singer-songwriter Dawn Drake leads this worldbeat-meets-funk ensemble, which breaks down cultural barriers by incorporating everything from Afro-Cuban jazz to hip-hop to samba into a soul-shaking mix.

The musical march kicks off at 4:30 on Montague Street at the Promenade, heads down Montague Street toward Court Street, winds through downtown Brooklyn and marches up and down Atlantic Avenue.

Come outside and dance it out

5:00 pm Mr. Evan Bumblebee Jamboree
Since 2015, Bumblebee Jamboree (BBJ) has been hosting family concerts and group music classes for children ages 6 and under.  A seasoned performer and art educator Mr. Evan performs music influenced by classic rock ‘n’ roll and includes elements of movement and storytelling to make for a fun and engaging experience for parents and children alike. Get ready for fun time for all.

Follow Shinbone Alley on a sidewalk musical march from Court Street down  Montague Street to Hicks Street and Pierrepont Place where they’ll continue their performance at the Dance Party.

6:00  – 8:30 pm DJ CprdG
DJ CprodG takes the mic to keep Montague Street filled with music and dancing. DJ CprodG has been around music since taking his first step as an infant.  The story is that he learned how to turn on the stereo, put on headphones, and rock out while in diapers, before uttering his first words,  destined to become a DJ.

As a child, he incessantly listened to his parent’s records on his Fisher-Price record player and he watched MTV and similar music video broadcasts 24/7.  He began collecting music in high school and in college he taught himself how to DJ, effortlessly and naturally, like that of a prodigy (hence, his name). CprodG now rocks events, nightclubs, bars, and lounges all over the city.

Make Music on Montague is co-sponsored by the Brooklyn Heights Association.